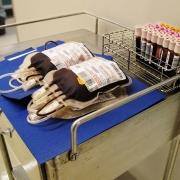 The Food and Drug Administration (FDA) has revised their guidance for screening donated whole blood and blood components for Zika virus, replacing the guidance put in place during the height of the Zika outbreak in August 2016. The revised guidance allows blood establishments to utilize pooled testing of donations, instead of testing each donation individually. Testing of individual donations is still required if there is an increased risk of mosquito-borne transmission of Zika. At this time, Zika has local transmission in Puerto Rico and the U.S. Virgin Islands, which would require testing of individual donations, but this revised guidance excludes all 50 incorporated states since they do not currently have mosquito-borne transmission of the virus.1 The FDA’s decision to use pooled testing brings Zika screening in line with the way blood donations are screened for other diseases, including HIV, West Nile, and hepatitis B.2

Zika first emerged in Brazil in late 2015, and was quickly detected in the United States in travellers originating from Brazil and, as the epidemic spread, surrounding countries. As 2016 progressed, local transmission of the Zika virus was detected in both Florida and Texas, though such mosquito-borne transmission is believed to have been eliminated by the summer of 2017. The epidemic both domestically and internationally has dramatically dwindled since then, due to a combination of factors including mosquito control, prevention measures, and decreased host susceptibility due to the high initial incidence of the disease.3 In the U.S., there have been no cases of mosquito-borne transmission of Zika virus in 2018, and only 41 cases in travellers.4

The association of Zika virus with severe birth defects, its persistence in whole blood, and four cases of possible transmission of Zika by blood transfusion in Brazil all raised significant questions about the safety of the blood supply.5 In February 2016, the FDA recommended screening blood where the outbreak was active, which at the time was only U.S. territories;6 within six weeks, all blood donations were being screened in Puerto Rico, where the outbreak was, and remains, much more severe than the rest of the United States.5 On August 26, 2016, in response to the widespread nature of the outbreak, the risks posed by infection, and the large proportion of asymptomatic cases, the FDA issued revised recommendations directing that all whole blood donations and blood components in the U.S. be screened for Zika virus.7

The American Red Cross supplies roughly 40% of the blood and blood products in the United States and its territories.8 Starting June 20, 2016, the Red Cross began screening all of its whole blood donations and blood components in the U.S. for Zika RNA using the Procleix Zika Virus Assay manufactured by Grifols Diagnostic Solutions, under a special emergency use authorization as an investigational new drug for Zika virus applications.9,10

Between June 2016 and September 2017, 4,325,889 donations were screened by the Red Cross in the United States; 160 were initially reactive for Zika and 9 were confirmed positive. Of these, 4 were IgM negative, meaning they were likely not infective, and one was the recipient of an experimental vaccine.9

Researchers estimated that each RNA-positive donor cost $5.3 million per year to detect using individual donation screening, regardless of whether they were infectious or not, when testing is done by this type of transcription-mediated amplification (TMA) assay. Testing for Zika within the pooled blood supply remains expensive, but the pooled testing method will lower costs compared to the individual assay by an average of $4 per donation.9